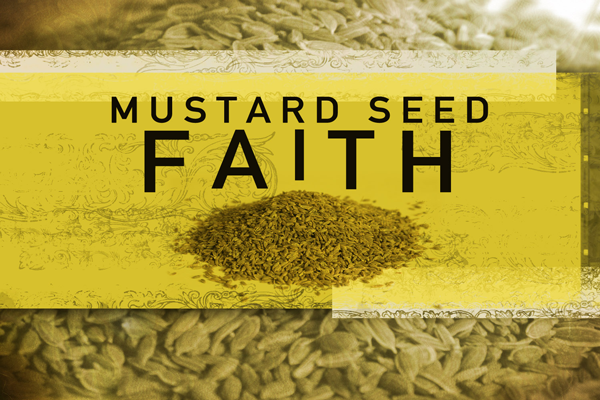 17 Jesus said to his disciples: “Things that cause people to stumble are bound to come, but woe to anyone through whom they come. 2 It would be better for them to be thrown into the sea with a millstone tied around their neck than to cause one of these little ones to stumble. 3 So watch yourselves.

5 The apostles said to the Lord, “Increase our faith!”

6 He replied, “If you have faith as small as a mustard seed, you can say to this mulberry tree, ‘Be uprooted and planted in the sea,’ and it will obey you.

7 “Suppose one of you has a servant plowing or looking after the sheep. Will he say to the servant when he comes in from the field, ‘Come along now and sit down to eat’? 8 Won’t he rather say, ‘Prepare my supper, get yourself ready and wait on me while I eat and drink; after that you may eat and drink’? 9 Will he thank the servant because he did what he was told to do? 10 So you also, when you have done everything you were told to do, should say, ‘We are unworthy servants; we have only done our duty.’”

The gospel reading for today, Luke 17:1-5, 6-10 addresses a temptation that all Christians face: fideism.

Fideism is ‘faith in faith’, in other words the attempt to measure one’s faith. The disciples are stuck in fideism: ‘Lord increase OUR faith.’ Fideism causes inflated faith (‘I’m so faithful and pious’) or deflated faith (‘I have no faith, what’s the point of piety?’)

Jesus opposes fideism. When he uses seed-metaphors for faith he is not saying that faith is outwardly measurable. Rather, he is making the point that faith is related to the human heart. It is an inward thing. Faith may, at face value, seem insignificant, but we can see the tree and it’s fruit. Only God can tell if we ‘measure up’ so to speak. It is Christ who measures our faith. He came to serve us, dropping on his knees to wash us, serving us with water, bread and wine. He shares his cross with us, putting to death our egocentric fideism. He measures us up – lifts us up – to God.

In this lifting up we trust in this merciful God. With trusting hearts ‘active faith’ (the good yummy fruit) can be seen  in our everyday lives of work, family, and play. Faith releases us into the household of God. There we do radical things like putting mulberry trees in the ocean, or show God to the world in our ‘seemingly’ mundane activities. Either way, we are ‘little Christs’ to the world through faith.